World War 1 (WW1), First World War, or the "Great War", always seemed so distant in the past to me, after all it was 100 years ago. I only ever knew one of my relatives that was around during the 1914-1918 war, and that was my great grandmother, my paternal grandfathers mother. My great grandmothers husband was "Lewis William Moore", and he fought with the Canadian Expeditionary Force during the early stages of the war, eventually being discharged in 1916 as a result of wounds, and later dying in 1942 likely from gas related side effects.

My Uncle (my Fathers brother) has spent a great amount of time researching our family WW1 history; this family history, and along with the 100 year anniversary being in 2014, I personally have gained a new interest and respect for all the men, and my distant relatives who fought during that time.

In September 2015 I had the chance to spend 4 days in Belgium, and a full day touring the Flanders area - although that was not long enough by a long shot!. We booked a battlefield tour, with a small company (link at bottom of the page), that only took 8 of us in total (3 Brits, 3 Americans, and 2 Australians). The following images and text are a timeline of our day spent in the Flanders area. For more detailed info on WW1 and specific battles, I will include links throughout the blog, and at the bottom of the page.

Our first stop in Flanders was NE of Ypres (Leper) at the village of Saint Julien, it was here that the German's first used poison gas, the date was 22 April, 1915. The result was 6,035 Canadian Casualties (1 man in every 3 became a casualty, and 1 in every 9 was killed). As a tribute to the Canadian casualties there is a very moving memorial, called the "Brooding Soldier".

From Saint Julien our journey continued in a SEE direction through beautiful farmland, it's very hard to imagine this whole area was almost a barren landscape of mud and craters back in the 1910's. Our tour guide pointed out several shells poking out of the farm fields, a very common occurrence even 100 years after the war!.

Our next stop was Tyne Cot, the largest Commonwealth cemetery in the world. This cemetery was the one I was expecting to be the most moving, and it certainly does move you. There are nearly 12,000 graves, and nearly 34,000 names on the memorial to the missing - including "George Frederick Worboys", my Great Great Uncle on my Paternal Grandmother's side. George we believe was killed during the First Battle of Kemmel Ridge, in April 1918. The cemetery today sits upon a hill in the Passchendaele area, this ridge was strategically important to both sides.

After the very moving visit to Tyne Cot, our journey continued a short distance to the village of Zonnebeke. This village is home to the Memorial Museum devoted to the battle of Passchendaele (aka third battle of Ypres). The battle of Passchendaele took place between July to November of 1917, and consisted of many battles, including the battle for Menin Road Ridge, and the battle of Polygon Wood. Commonwealth casualties were reported to be nearly 245,000, and German casualties to be nearly 400,000. Most of the villages were obliterated in this region during this battle, and it is very hard to comprehend when you visit them today.

Continuing a short distance directly south of Zonnebeke is the site of the battle of Polygon Wood, 26 September to 3 October 1917. Here lies the small Polygon Wood cemetery and much larger Buttes New British Cemetery. The 5th Australian division captured the high ground in Polygon Wood during this battle, and the memorial to them stands atop of the highest point. The Australian in our tour party laid some poppies to pay respect to his relatives from the 5th division, a very moving moment for us all. 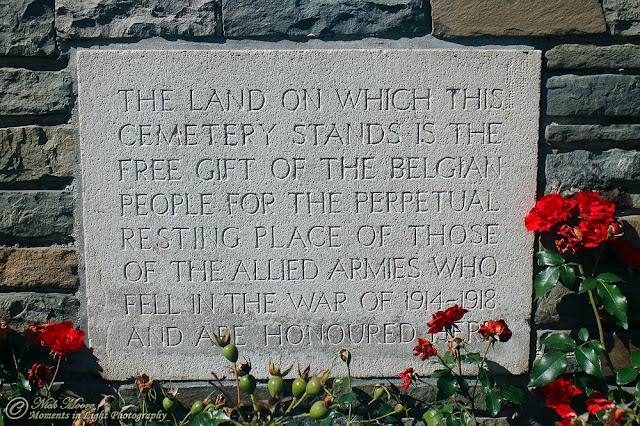 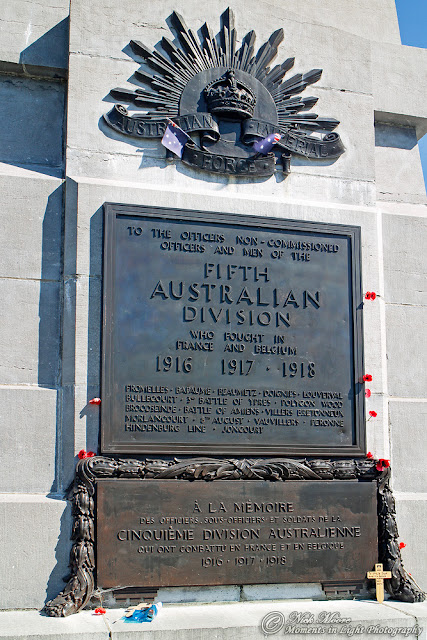 Most of the original trenches, dugouts, pillboxes etc are on private farmland, but you can see many from the road side while driving around the area. One of the original trenches that is accessible (at your own risk) is along the Menin Road at Hooghe. This is a German trench that sits beside a large bomb crater now filled with water.


Our next stop was the City of Ypres, an ancient town that was an extremely strategic location during WW1. The City stood along the path of the German's route through to France, and during the fierce fighting during the battle of Passchendaele the City was obliterated (see this picture). After the war it was decided the City centre would be re-built to exactly the same layout as pre-war, and today it is amazing to stand in the center and imagine how it would of been in 1917.

The Menin Gate stands in Ypres, opened in 1927. This structure is a truly moving and impressive memorial for all the missing soldiers of Britain and the Commonwealth.


The month preceding the Battle of Passchendaele saw the Battle of Messines Ridge, 7-14 June 1917. The objective was for the British to capture the German defenses on this high ground south of Ypres, and move north to Passchendaele, and eventually the Belgium coast. The British tunneled under the German front line on the Ridge, and laid 19 mines, the battle began with there detonation. The mine craters can still be seen today, filled with water. The craters resemble peaceful ponds, sitting in the middle of green farmland; but when you stop and ponder, you realize that these are memorials to those who died when the mines were detonated.

I have a handful of distant relatives on both sides of my family that fought and died during WW1, but only 2 that are buried or commemorated in Flanders. The grave of my Great Great Uncle on my Maternal Grandmothers side is located a very short distance NE of Ypres centre. John (or Jack) Glassbrook was a master weaver for William Morris, and was based in Edinburgh prior to the call into military service. John joined the Argyll and Sutherland Highlanders, and served in the Tank Corps. He arrived on active duty in Flanders in 1917, when his tank was hit during the attack on Greenberg Ridge, losing his life on 26 September, 1917.

Of all the WW1 battle sites, memorials and cemeteries we visited, John's grave was probably the most moving; the Wieltje Farm cemetery is a very small cemetery (115 graves) in the middle of a farm field, filled with head height corn crop when we visited. What was so moving about the site, besides the fact it contains one of my relatives, was that these graves were most likely dug soon after the soldiers were killed. This means this cemetery is a "battlefield cemetery", unlike Tyne Cot where soldiers were moved to after the war. Standing within this small cemetery, gazing over the corn, and imagining what happened on this spot 98 years ago, for me really put it into perspective.
I laid some poppies and a cross to pay my respects, may John Glassbrook never be forgotten.

In Flanders fields the poppies blow
Between the crosses, row on row,
That mark our place; and in the sky
The larks, still bravely singing, fly
Scarce heard amid the guns below.

We are the Dead. Short days ago
We lived, felt dawn, saw sunset glow,
Loved and were loved, and now we lie
In Flanders fields.

Take up our quarrel with the foe:
To you from failing hands we throw
The torch; be yours to hold it high.
If ye break faith with us who die
We shall not sleep, though poppies grow
In Flanders fields.

For more information about WW1, the battle sites, cemeteries and memorials, the following links are a great source:
World War One on BBC.com
World War One on Wikipedia
Commonwealth War Graves Commission
A Guide to WW1 battlefields and history
Flanders Fields Battlefield tours
Posted by Nick M at 3:41 PM No comments: